When people become self-centered and self-enclosed, their greed increases. The emptier a person’s heart is, the more he or she needs things to buy, own and consume. It becomes almost impossible to accept the limits imposed by reality. In this horizon, a genuine sense of the common good also disappears.”

The recent visit of Pope Francis to Cuba and the United States has brought into focus something beautiful that is happening not only within the Church but with the unfolding of transcendent consciousness itself. There is a growing recognition of the interconnection of all life, of a divinity not separate from creation but one that infuses all life, all nature, all of creation.

I am so pleased and inspired to see that the grievous error committed upon nature, the feminine and indeed all life reflected in more than a thousand years of orthodox doctrine has been addressed, corrected and transcended by this extraordinary Pope! Dating back to St. Augustine and his 5th Century AD work, “City of God Against the Pagans,” a document which codified the gulf between God and Man, the Divine and Nature, orthodox doctrine has held that, because of the idea of Original Sin, humanity is fallen and nature, and the feminine, were equally stained and corrupt. Nature was devoid of divinity (for the Divine was separate and beyond creation) and could therefore be subject to the dominion of man.

This mistaken philosophical idea has paved the way for terrible, destructive actions and attitudes toward our natural world, and each other, and allowed for an economic philosophy that sees nature, and all life, merely as resources to be exploited, devoid of divinity, compassion and consciousness.

In the May 24, 2015 Encyclical, “Laudato si, mi’ Signore” (“Praise be to you, my Lord”), Pope Francis lays out a radically different relationship with nature, each other and with the Divine (or, as I would call it, the transcendent energy consciousness). From the beginning of the document, the Pope reflects his humble nature, addressing the encyclical not to the hierarchy of the Church but instead to ALL PEOPLE; this humility and compassion seems to reflect the heart of Francis, and is what is needed for the continuing unfolding of consciousness.

The focus of this Encyclical is to enter into “new dialogue about how we are shaping the future of our planet. We need a conversation that includes everyone, since the environment challenge we are undergoing, and its human roots, concern and affect us all.” (Laudato si’, #14). With the heart of a poet, Francis goes on to say:

This sister now cries out to us because of the harm we have inflicted on her by our irresponsible use and abuse of the goods with which God has endowed her. We have come to see ourselves as her lords and masters, entitled to plunder her at will. The violence present in our hearts, wounded by sin, is also reflected in the symptoms of sickness evident in the soil, in the water, in the air and in all forms of life. This is why the earth herself, burdened and laid waste, is among the most abandoned and maltreated of our poor; she “groans in travail” (Rom 8:22). We have forgotten that we ourselves are dust of the earth (cf. Gen 2:7); our very bodies are made up of her elements, we breathe her air and we receive life and refreshment from her waters.

Nothing in this world is indifferent to us.”

While Pope Francis and the Church still see a doctrinal separation between God and Man, he recognizes that, in practice, such a schism can no longer be used to justify our treatment of nature and each other. As he states,

“we must forcefully reject the notion that our being created in God’s image and given dominion over the earth justifies absolute domination over other creatures . . . This implies a relationship of mutual responsibility between human beings and nature.”

Ultimately, the publishing of this Encyclical, and the recognition on the part of Pope Francis and, as a consequence, of the Church, of the need for a new relationship between humanity and nature is a reflection of a new, emerging relationship with transcendent consciousness. While Francis goes into great and noble detail about the destruction and exploitation we have and continue to visit upon nature, the act of publishing this work signifies something even greater at work: the gradual shift of human consciousness, from one focused upon power, control and domination to, instead, one that operates from the heart (the 4th Chakra).

Recognition of our obligation to “till and keep” nature begets recognition of the web of all life and creation. In the greater scheme of things, this will be seen as a small but firm step toward the recognition of the divinity in each of us, in all of life and in all of creation. We are the stuff of divinity, of transcendent energy consciousness, and it is heartening to me to see the growing awareness of this reflected in practical action by Pope Francis.

Please click on this link to read the “Laudato si, mi’ Signore” in full.

Life is eternal; and love is immortal; and death is only a horizon; and a horizon is nothing save the limit of our sight.”

The questions of what happens when you die, or is there life after death, are really misleading because, frankly, we simply don’t and can’t definitively know. Upon death, the capacity to “know” stops, for knowing requires direct participation in this sensory world of time and space. In fact, these are simply the wrong questions to ask, for they proceed from a flawed assumption, that being that consciousness is a product of the body, generally thought to be located in the brain and central nervous system; and when the body fails, consciousness therefore ends.

This is the question we must ask with respect to the notion of life after death: do you identify with the light bulb or the light? Light, the energy that we see, is everywhere, is unending; it precedes the existence of the light bulb, and will continue in perpetuity. Transcendent energy consciousness shares the characteristics of light – it is everywhere and nowhere, it transcends time and space yet is immanent throughout it.

Consciousness, it could said, is the essence of the soul; it precedes the body and continues after the vessel – the light bulb – ends. So, again, you must ask yourself the question: Do You Identify with the Light Bulb or the Light? We are all aspects of transcendent energy consciousness, here to have an experience of living and then to share the consciousness we unfold with the transcendent upon the end of the body. Have no fear! Fear is of the body, of time and space; your true life transcends everything that we can know and imagine.

Let me share with you some wonderful passages from the incredible author Anne Baring’s website in an article entitled, “The Survival of the Soul.”

Death is the side of life averted from us, unshone upon by us: we must try to achieve the greatest consciousness of our existence which is at home in both unbounded realms, inexhaustibly nourished from both…The true figure of life extends through both: there is neither a here nor a beyond, but the great unity in which the beings that surpass us, the ‘angels’, are at home…We of the here and now are not for a moment hedged in the time-world, nor confined within it…we are incessantly flowing over and over to those who preceded us.”

And this passage, considering the difficulty we in the West have discussing death:

I know that for many people in their later years like myself, the inevitability of death weighs like a stone on their heart yet they cannot share their grief and apprehension with their children or friends because there is a reluctance to talk about an experience that awaits each one of us yet is deeply threatening to us. Moreover, in a culture which believes that consciousness originates in the brain and that the death of the brain must inevitably bring about the extinction of consciousness, the subject of our survival beyond the death of the body rarely comes up for discussion and so the deeper concerns of the heart are unable to find a channel of expression.” 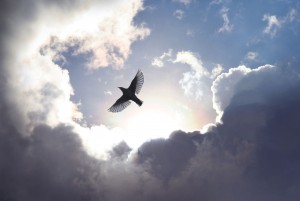 Why does everything have to die?

Life needs death to maintain a balance. Without one, you cannot have the other. Without death, living entities would multiply and consume everything, thus destroying all of creation. Consciousness provides for a balance by making life and death interdependent. Like the Apollonian energies of creation are balanced by the Dionysian energies of destruction, life and death are really two aspects of the same.

The renowned mythologist, Joseph Campbell, answers this question by demonstrating how Life lives on Death. In order to continue its existence, Life Must Feed on Other Life. Life and death, as a consequence, are two sides of the same coin.

Who or What Dies When We Lose a Friend or Loved One?

When the brain dies, we don’t know what happens. In fact, “happening” stops, for our bodies are the vehicles by which we experience this world of time and space.

As we think, we create time (within the brain). We orient ourselves in time and space with apodictic certainty that the rules of the duality, to which we are subject, apply across the universe. We therefore understand that everything is subject to this great cycle of Birth / Death / Rebirth.

Recognition of this great cycle, seen throughout nature, may have played a part in the 1st great act of civilization – burial of the dead. Through this act we honor the heroic act of being alive and struggling through the various levels of consciousness we discussed in Robert Johnson’s work.

This act represents a beginning in the shift from human animal to human spirit.

What Becomes of Consciousness After We Die?

As we noted before, while the body dies, consciousness does not. Transcendent Consciousness is not of duality (the world of time and space); it transcends our sensory experience but also gives rise to it.

Time and Space are intrinsic to our experience of duality. As we think, we are creating time. One cannot describe transcendence is it is beyond time and space, it is everything and nothing, it is and it is not; it is beyond the act of description itself.