. . . non-conceptual essence is pure non-duality or unicity in which the notions of both subject and object are merged. Just as the sun does not know light because it is light, so you do not know your original nature (as an object) because you are that. It is forever beyond the grasp of concepts and subject-object knowledge.”

– John Wheeler, The Light Behind Consciousness: Radical Self Knowledge and the End of Seeking

John Wheeler was one of the greatest American physicists of the 20th Century and was a close colleague of Albert Einstein, particularly later in his life. John understood clearly that reality as we understand it does not exist without someone or something to perceive it. Reality is itself a product of consciousness; transcendent consciousness precedes and is beyond time and space, yet is immanent and everywhere within it. 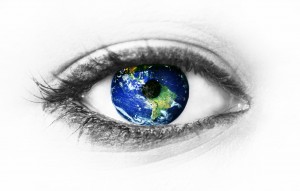 In fact, one may conceive of the universe as a “ceaselessly flowing quantum soup” until something conscious observes it. Without consciousness, the universe has no awareness of itself, has no independent, dualistic existence – it exists in potential but has no physical form until a consciousness perceives it.

In that sense, we are co-creators of the universe. Perception, asking questions, making decisions – these literally have the power of creation! The universe waits in potential for an observer to arrive and experience it, whatever form that consciousness may take – a human, a dog, a tree, a flower . . . you name it.

So, consider the awesome power you have for shaping your reality. The choices and decisions you make literally make your reality – choose from your heart, from your soul, and you will help to create a beautiful and sacred existence, founded in enlightened consciousness.